What are totem poles? 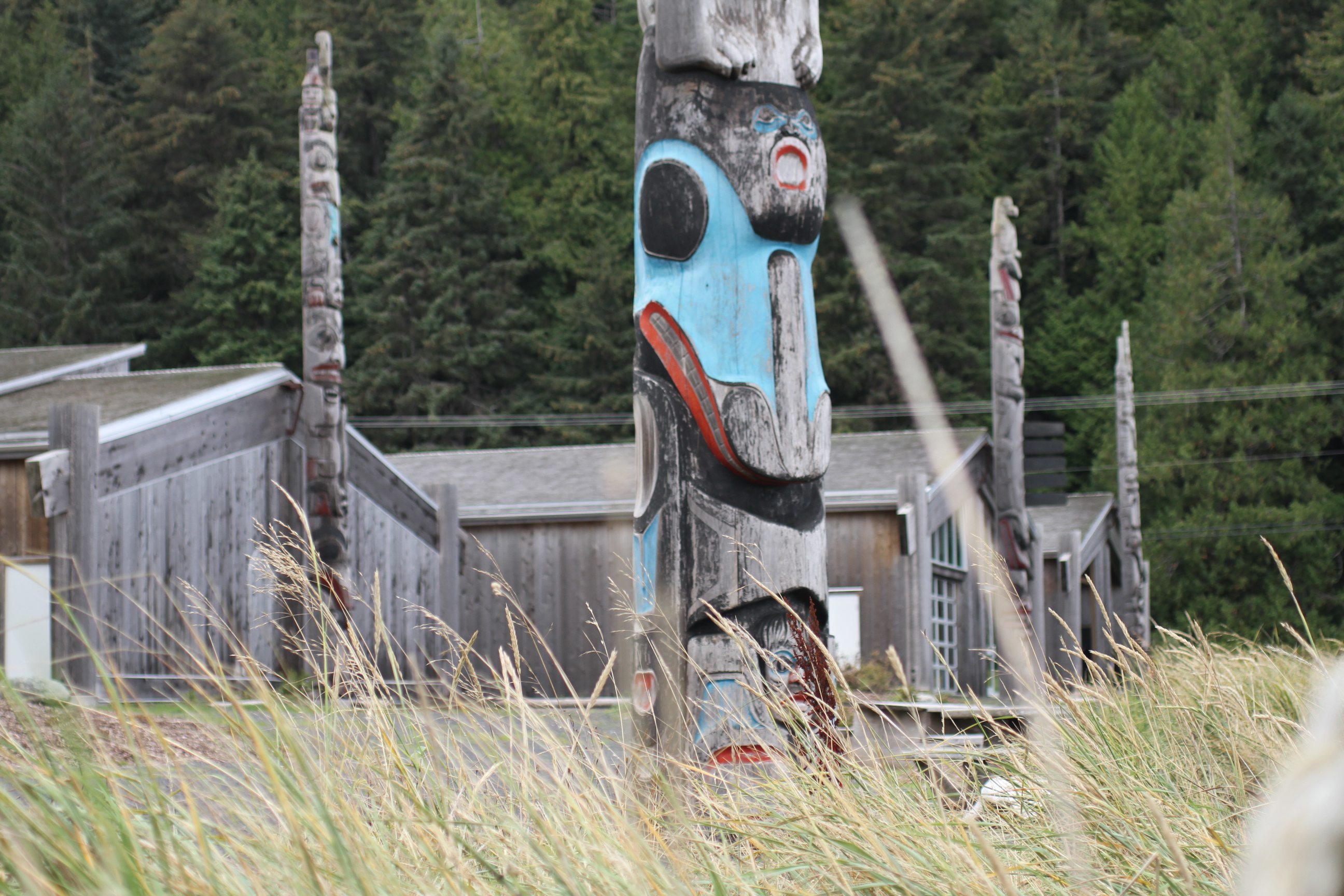 Most totem poles display beings, or crest animals, marking a family’s lineage and validating the powerful rights and privileges that the family held.  Totem poles would not necessarily tell a story so much as it would serve to document stories and histories familiar to community members or particular family or clan members.

A totem pole typically features symbolic and stylized human, animal, and supernatural forms.1 Totem poles are primarily visual representations of kinship, depicting family crests and clan membership. For example, some Kwakwaka’wakw families of northern Vancouver Island belonging to the Thunderbird Clan will feature a Thunderbird crest and familial legends on their poles. Other common crests among coastal First Nations include the wolf, eagle, grizzly bear, thunderbird, killer whale, frog, raven, and salmon.2 Wealthy and influential families may have more than one crest. Totem poles can also be created to honour a particular event or important person.

Of all the material culture produced by coastal First Nations, the totem pole is likely one of the most recognizable cultural symbols of the Pacific Northwest. The array of different totem pole styles and designs reflect the rich diversity of the First Nations histories and cultures that produced them. This section will explore the meaning and purpose of totem poles, how they are constructed, stylistic variations, and their significance in cultural revitalization initiatives among First Nations.

st totem poles stand between 3 to 18 metres tall, although some can reach over 20 metres in height.3 Different types of totem poles are erected to serve various architectural and ceremonial purposes. Most longhouses had house posts, carved with human or animal forms, to support the main beams of the building. Similarly, some longhouses featured a house frontal pole, which would be located at the main entrance and often contained an opening for passage into the house. Mortuary poles, which contained the remains of the deceased in grave boxes, served as both a tomb and a headstone. Likewise,

a memorial or commemorative pole was often created to honour an important deceased person, usually by his or her successor. Memorial poles tend to be the tallest type of pole, particularly among the Tsimshian of the Nass and Skeena Rivers in central British Columbia. Less commonly, some First Nations carved “shame poles” to ridicule neighbouring groups who had unpaid debts. Shame poles were more common in the nineteenth century, but today, some First Nations erect these poles as a form of protest against the loss of Aboriginal territory or for other political grievances. One well-known shame pole, which stands in Cordova, Alaska, was carved by Tlingit fisherman Mike Webber to protest the environmental disaster and political mishandling of the 1989 Exxon Valdez oil spill in Prince William Sound.4

The totem pole designs that most people recognize today were, for the most part, developed in the last 200 years.5 Most historians and other experts agree that totem pole carving did not reach its peak until the nineteenth century, when many coastal First Nations were involved in the fish and fur trade with Europeans. During this time, coastal First Nations acquired new tools that enabled them to construct more elaborate poles. Most poles, even though they are made from rot-resistant cedar, last only about a hundred years before they begin to disintegrate.6 This disintegration is recognized as a natural part of a pole’s life cycle.

Carving a totem pole requires not only artistic skill, but an intimate understanding of cultural histories and forest ecology. Most totem poles are made from Western red cedar, a rot-resistant tree that is straight-grained and easy to carve.7 Before a cedar tree is harvested for a totem pole, many coastal First Nations communities will perform a ceremony of gratitude and respect in honour of the tree. Several trees may be inspected before a particular tree is chosen for its beauty and character. According to Roy Henry Vickers, an artist of Tsimshian and Haida ancestry, “each tree is like a human being; it has its own personality and uniqueness.”8

Traditionally, totem pole carving was done by men, although today both men and women have become skilled carvers. Many totem pole carvers have honed their skills since childhood, typically from watching their fathers and uncles carve from cedar wood. After a tree is felled, the wood is debarked and shaped using implements such as adzes, axes, chisels, carving knives, and chainsaws. Other artists argue that technological innovation is an important part of cultural transformation and growth.9  Whatever their personal preference, artists use these tools to create the swirling, oval shapes common in coastal First Nations artwork, also known as “ovoid” design.10  An artist will frequently pay close attention to the grain and colouration of the wood to capture the sense of life and movement in his or her carving. After the wood is carved, some artists paint their poles, or choose to leave the pole unpainted. Many poles are coloured using synthetic paints, and some are painted with natural pigments derived from ground charcoal and ochre.11

For a good visual reference of different totem pole styles, please refer to this photographic collection [PDF] produced by the Royal B.C. Museum.

The cultural variations of totem pole styles are complex and go beyond the purview of this section, but a few generalizations can be made about regional characteristics. The Coast Salish of the Lower Fraser tended to carve house posts rather than single stand-alone poles. These house posts would frequently appear on the interiors of longhouses. In the central coast, the Haida of Haida Gwaii and the Tsimshian carved towering totem poles, often reaching over 100 feet tall, which were usually erected beside a longhouse. Coast Tsimshian poles often had horizontal line breaks between totem figures, while Haida poles had closely intertwined designs with a shallow relief. In contrast, the Kwakwaka’wakw poles featured deeply etched surfaces and jutting wings and beaks.12 The famous Stanley Park totem poles, although located on Coast Salish territory, include totem poles from all over coastal British Columbia, including Haida, Salish, Kwakwaka’wakw, Nisga’a, and Nuu-chah-nulth designs.

Despite the prominence of totem poles in the Pacific Northwest, there are some common misconceptions about the meaning and purpose of poles. Some mistakenly believe that First Nations worshipped totem poles as idols or sacred objects that contained the souls of deities, or revered them as talismans that could ward off evil. This misconception may have been the result of cultural misunderstandings among Christian missionaries, who mistakenly believed totem poles were used in shamanistic rituals. For a useful list of truth and fiction about totem poles, please visit author Pat Kramer’s website here, or the Tyee’s excellent article “Totem Poles: Myth and Fact.”

From their earliest origins to today, totem poles hold a significant socio-cultural role in many First Nations communities. Most First Nations commemorate the raising of a totem with a totem pole raising ceremony, which is often held concurrently with a feast or potlatch. Please click here for a video of a totem pole raising ceremony at the University of Alaska Southeast. At these ceremonies, the significance of the pole and stories of the crests are told, and visitors witness the events, including the right of a family’s claim to the crests depicted.13 As totem poles may be erected to commemorate the life of a chief, or may be commissioned to celebrate an important milestone or event, the reason for the pole’s creation is shared and celebrated in such ceremonies. 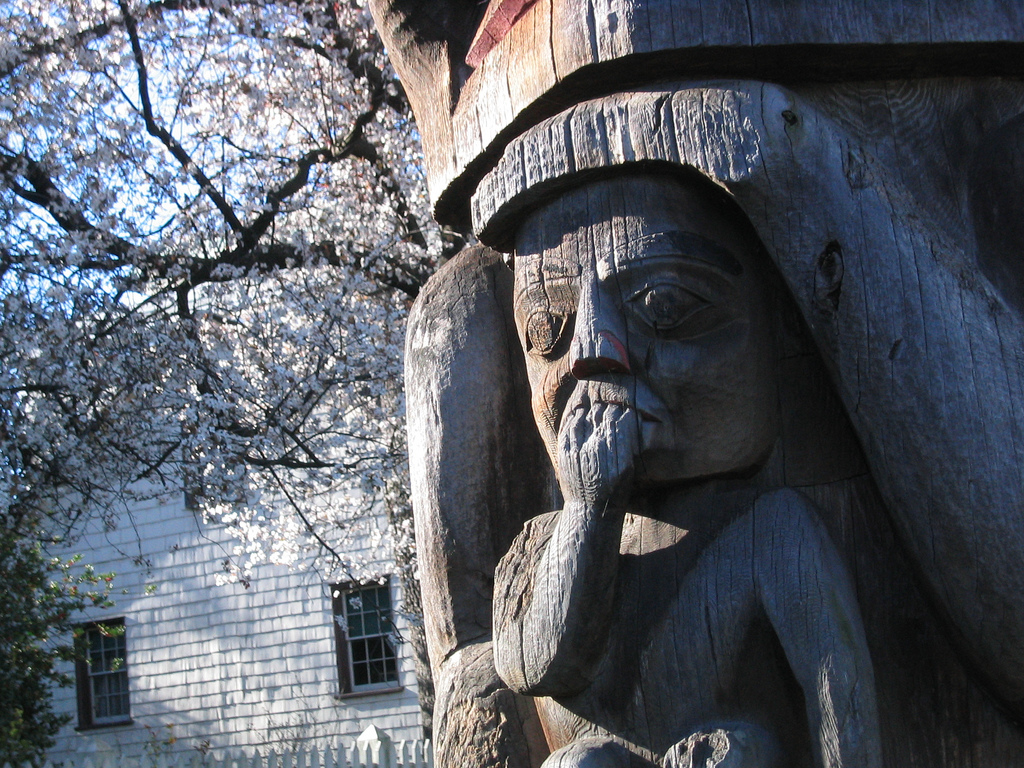 For many years in the history of British Columbia, the presence of totem poles in the province came under threat by non-Aboriginal settlers who predominantly viewed the poles as paganistic, and an impediment to colonial efforts to Christianize and “civilize” First Nations people. Colonial officials attempted to assimilate Aboriginal peoples by banning cultural expressions and practices, such as the potlatch in 1884, based on the expectation that Aboriginal peoples would then adopt Christian traditions. Along with the outlawing of ceremonies, thousands of items, such as ceremonial regalia, were forcibly taken from Aboriginal peoples and sent to museums and private collectors throughout North America and Western Europe. This included totem poles. Much of this discriminatory legislation was not repealed until 1951, although the relocation and repatriation of stolen materials is ongoing.14

In 1872, Chief G’psgolox commissioned artists Hemzid and Wakas to carve a pole in memory of the chief’s deceased wife and children. Starting in the early 1920s, the federal government adopted a policy of salvage anthropology and, fearing the decline of Indigenous art, began to buy out totem poles from communities living along the Skeena River. In 1927, Iver Fougner, an Indian Agent in Bella Coola, wrote to the Department of Indian Affairs asking permission for the Swedish Consul of British Columbia to purchase the G’psgolox Pole.16 One day in 1929, the pole was severed and taken from the Haisla village of Misk’usa while the villagers were away on a fishing trip.17 The pole was then shipped to Sweden, where it remained in storage until 1980, when it was finally put on display at the national Museum of Ethnography in Stockholm.

Eventually, the Haisla learned of the pole’s whereabouts in 1991, and began the long journey of repatriating the pole. The Haisla and the museum negotiated a plan for repatriation: the museum agreed to return the pole, and the Haisla would carve a replacement. Finally, in April 2006, the pole returned to Vancouver. On July 1, 2006, the Haisla officially welcomed the pole home to Kitimat. It was the first pole in Canada to be repatriated from overseas. Louisa Smith, a spokesperson for the Haisla chief, summed up the emotion of the day: “The repatriation of the G’psgolox totem pole has been a journey of a hundred years and thousands of miles…Our children and future generations will be able to see, touch and feel a piece of their history, reclaimed by a nation against all odds.”18

This story is documented by director Gil Cardinal in a National Film Board (NFB) documentary entitled Totem: The Return of the G’psgolox Pole. You can view the film in its entirety on the NFB website, here.

For generations, First Nations peoples have made major efforts to maintain their cultural traditions in the face of assimilationist policies. Following the repeal of discriminatory legislation in 1951, a new generation of artists began to learn and promote the artistry of totem pole carving as a form of cultural revitalization. Famous totem pole carvers include Henry Hunt (Kwakwaka’wakw), Mungo Martin (Kwakwaka’wakw), Martin’s grandson Doug Cranmer (Kwakwaka’wakw), Ellen Neel (Kwakwaka’wakw) and Bill Reid (Haida), who all have works exhibited at the Museum of Anthropology at UBC and some at the Royal B.C. Museum in Victoria.15 Other First Nations sought to repatriate totem poles that have been taken away by non-Aboriginals as collector items or “curiosities,” as well as poles previously sold to Indian agents and museum collectors.

In the early 1990s, the Haisla people of the Kitimat area in B.C. began the process of repatriating a mortuary pole that had been taken away from their community in 1929. The pole had been taken without consent by an Indian Agent who sold it to a Swedish museum. Despite the passage of nearly 80 years, the Haisla persevered and succeeded in their quest to repatriate the G’psgolox Pole. 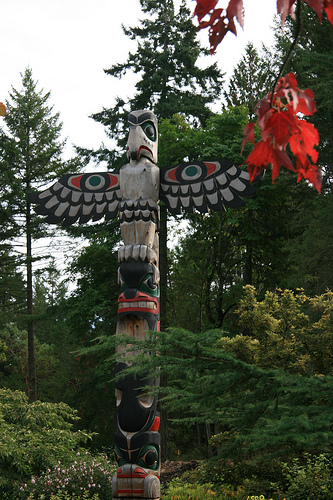