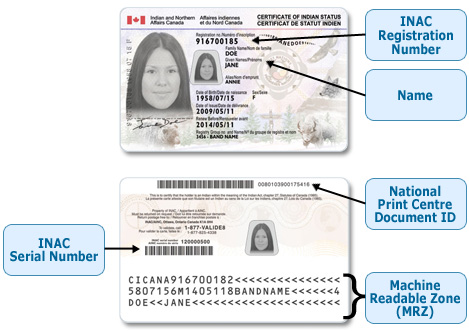 What is Indian Status?

“Indian Status” refers to a specific legal identity of an Aboriginal person in Canada. With the creation of the in 1876, the Canadian government developed criteria for who would be legally considered an Indian. This criteria continues to be outlined in Section 6 of the Indian Act, thus defining who qualifies for Indian status. Given the government’s historical unilateral authority to determine who is legally Indian, the Assembly of First Nations as well as other leaders and academics have described the Indian Act as a form of apartheid law.1

Aboriginal peoples in Canada who are classified as “Status Indians” are registered under the Indian Act on the Indian Register– a central registry maintained by Indian and Northern Affairs Canada (INAC).  Status Indians are issued a status card that contains information about their identity, their band, and their registration number.

“Status Indians” are wards of the Canadian federal government, a paternalistic legal relationship that illustrates the historical imperial notion that Aboriginal peoples are “children” requiring control and direction to bring them into more “civilized” colonial ways of life. As an 1876 Department of Indian Affairs report explains:

Our Indian legislation generally rests on the principle, that the aborigines are to be kept in a condition of tutelage and treated as wards or children of the State. …the true interests of the aborigines and of the State alike require that every effort should be made to aid the Red man in lifting himself out of his condition of tutelage and dependence, and that is clearly our wisdom and our duty, through education and every other means, to prepare him for a higher civilization by encouraging him to assume the privileges and responsibilities of full citizenship.”2

The Indian Act applies only to status Indians, and has not historically recognized Métis and Inuit peoples. As a result, the Métis and Inuit have not had Indian status and the rights conferred by this status despite being Indigenous to Canada and participating in Canadian nation building. (This is not to be confused with the Canadian Constitution’s recognition of Indian, Métis and Inuit peoples as Indigenous peoples, and thus with constitutionally protected rights. See Section 35 of the Constitution Act for further information on this specific topic.)

In keeping with paternalistic policies towards Aboriginal peoples, the Canadian federal government assumed fiscal responsibility for Indians in order to support the colonial structures it imposed on Aboriginal peoples through the Indian Act, such as band administration, education, and health care.  The Indian Act has historically stated that those with Indian status have rights to live on reserves, share in band monies, vote for band council and chief, and inherit band property. In 1985, an amendment to the Indian Act separated Indian status from band membership.  Bands were granted the right to develop their own membership codes, and thereby determine who can participate in band politics and society, as well as who can access band resources such as band property. Bands, however, did not have control over who gained or lost status. This power was retained by the federal government. While band membership frequently accompanies Indian status, it is possible to have Indian status without having band membership, or vice versa.

Who can have Indian Status?

There are complex rules governing Indian status, which are detailed in Section 6 of the Indian Act. Indian status has not been solely dependent on ancestry. As the Royal Commission of Aboriginal Peoples stated, “Recognition as ‘Indian’ in Canadian law often had nothing to do with whether a person was actually of Indian ancestry.”4 The Indian Act of 1867 defined “Indian” as:

First. Any male person of Indian blood reputed to belong to a particular band;

Secondly. Any child of such person;

Thirdly. Any woman who is or was lawfully married to such person.5

As this excerpt states, being “Indian” was entirely dependent on the male lineage. This privileging of the male lineage in order to define Indian status has resulted in profound gender inequalities. A woman’s status depended upon her father or husband and could change throughout her life. For example, a woman without Aboriginal ancestry marrying a man with Indian status would gain Indian status. Alternately, if a status Indian woman married a non-status man, she would lose status, or become “enfranchised.” These provisions have resulted in social and political conditions that have disproportionately discriminated against Indian women, and have been challenged in the last few decades of the 20th century.  As a result of major pressure on the Canadian government to address the discriminatory provisions of the Act, the definition of Indian status has undergone significant revisions since 1985 with Bill C-31. This is explained in more detail further below.

Historically, the government also outlined how one may lose their Indian status and become a full Canadian citizen. The process of losing one’s Indian status for citizenship rights was called “enfranchisement.”

Initially, any Indians who obtained a university degree and/or became a professional such as a doctor or lawyer would automatically lose their status. The same process would occur for any Indian who served in the armed forces, or any status Indian woman who married a non-status man. When a woman was enfranchised, as with any enfranchised Indian, she was not provided with compensation or support, nor could she be guaranteed access to her community of origin since her band membership would have been removed as well. Essentially, she lost her Indian rights. Of course, once someone had lost their status, or was enfranchised, they were unable to pass along Indian status (and hence the associated rights) to their children, thus severing ties to their ancestry and community— their Indian ancestry was no longer legally recognized, and in many cases they were further separated from their communities physically, geographically, socially, spiritually, psychologically, and emotionally.

As previously discussed, a long fight and staunch opposition to these policies by women who had lost their status resulted in the passing of Bill C-31 to amend the Indian Act. It is now impossible for a status Indian to lose their status, and those who had involuntarily lost their status were able to be reinstated with it. These amendments, however, have not entirely remedied the discriminatory history, as descendents of women who have lost their status continue to face challenges. Therefore, amendments to the Indian Act regarding status continue to be challenged and revised. For more information about this, see our section on Bill C-31.

Many people view Indian status as an assimilative tool, a mechanism for the Canadian government to eventually “legislate out” Indian identity. The Canadian government has historically acknowledged its unique relationship with, and hence obligation to, First Nations, and therefore the government created a definition of “Indian” in order to administer services and resources to the appropriate people (namely, Aboriginal peoples). However, in using legislation to determine who qualifies for “Indian status” and the rights conferred with that status, some have argued that it creates a conflict of interest. For example, some may argue that it is in the government’s interest to reduce the numbers of eligible Indians and therefore ease the associated governmental responsibilities and expenditures. To “legislate out” Indian status would ultimately absolve themselves from these obligations.

Early legislation was created under the assumption that Indians would only temporarily be wards— that over time they would either die out or assimilate and enfranchise. While these ideas have now changed and it is widely recognized that Aboriginal peoples will retain their cultures and customs, legal experts point out that the Canadian government has managed to change its rhetoric while keeping its assimilative objectives the same. Although there have been amendments to the Indian Act, current legislation ensures that status can only be passed along for a few generations until it virtually disappears.

The Bill C-31 amendment has created new categories of Indian status, which renders determining one’s status even more complex. One is no longer either status or non-status— they may also be either referred to as “6(1)” or “6(2).” Subsection 6(1) of the Indian Act states who is eligible for Indian status.  Once Bill C-31 was passed in 1985, a new subsection was created to apply to those who had their status re-instated, and to their descendents:  subsection 6(2). Susbsection 6(2) states that a person is entitled to be registered if one of their parents (regardless of sex) were registered as a status Indian.

What complicates this new division of 6(1) and 6(2) is the ability to pass along status. Should a status Indian under subsection 6(2) have children with a non-status person, their children are ineligible for Indian status. This is sometimes called the “second generation cutoff.” A person accorded status under subsection 6(1) does not face this penalty. Interestingly, should two 6(2) status Indians marry and have children, their child will become 6(1). This perpetuates the discriminatory measures of the Indian Act before Bill C-31, as certain Indians face penalties for “marrying out,” or marrying (and subsequently having children with) a non-status person. While Bill C-31 made it impossible for the government to remove one’s status, the government has simply created a new mechanism to serve this same purpose. The government’s original objective of eventually removing Indian status entirely is still served; Bill C-31 simply deferred it a generation.

People affected by the “second-generation cutoff” may face certain pressures from their community regarding whom they can marry and have children with in order to maintain their Indian status. For a thought-provoking examination into how this manifests in a Mohawk community, we recommend the National Film Board of Canada’s film “Club Native.” As was mentioned earlier, these categories rest predominantly on legislation and not on actual Aboriginal ancestry.

These subsections and the ability to pass on status to one’s children is currently being reexamined by the Canadian court system, thanks to Sharon McIvor, a Nle’kepmxcin woman from Merritt, B.C. who has led the fight against its discriminatory provisions.

The problematic nature of Indian status as created by the Indian Act has resulted in wide-ranging implications for Aboriginal peoples ineligible for status. Aboriginal people without status under the Indian Act remain legally unrecognized as Aboriginal peoples by the Canadian government.  Non-status Indians face the challenges of being legislated out of their communities, unable to participate in band politics, and ineligible for the same rights and various types of government support offered to status Indians. However, status and non-status Indians also share many common concerns – displacement from their ancestral homelands and their traditional ways of life, socio-economic challenges, a desire to practice their own cultures and traditions and to determine their own identities and futures.